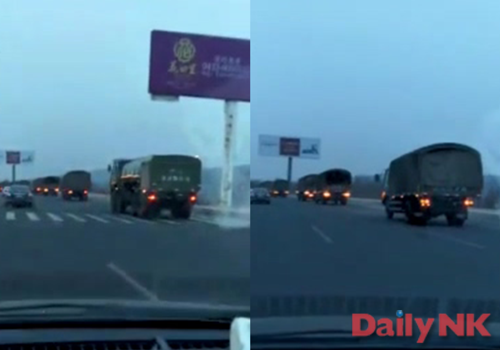 Dozens of Chinese military trucks were spotted on December 24 driving from Yanji (Jilin Province) towards the North Korean border, drawing the curiosity of passersby.
A source in the area told Daily NK on December 30 that trucks looking similar to those typically used by Chinese border forces were seen driving in a long convoy over the course of four days, mostly at night in order to avoid attention. He added that this is not a typical occurrence.
“There were so many trucks that it caused congestion on the road. There has never been a situation like this before where so many trucks have been present in the Yanji area near the border,” the source said.
Another source in China close to North Korea affairs told Daily NK that “the Chinese military is gathering along the entire border, including the Tumen and Yalu River areas. I also heard that their movement to the border is now complete.”