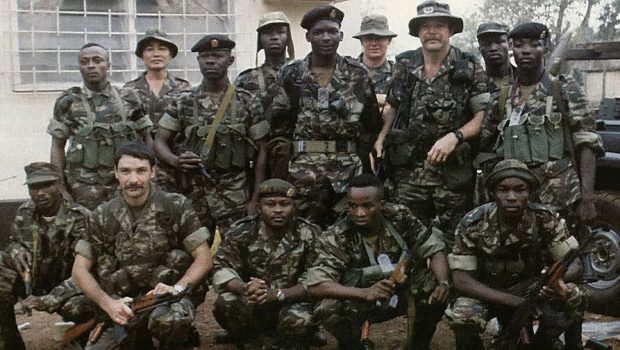 In recent years, U.S. military operations in Africa have greatly expanded. Washington has established forward operating locations (FOL) and drone bases. It has helped various African countries, like Liberia, retrain their militaries. It has tried to track rebel groups like the Lord’s Resistance Army and the East African terrorist group like Al-Shabaab. The U.S. Africa Command (AFRICOM) has been involved in wide-ranging activities.

Thanks to the work of a very few journalists—like Nick Turse who has greatly enhanced our understanding of U.S. Special Operations Forces in Africa or Craig Whitlock of The Washington Post who has exposed problems at U.S. drone bases—there’s more information about these expanded operations.

But one aspect of U.S. military operations in Africa remains vastly under-covered and unappreciated: the role of private military and security contractors (PMSC).

Domestic private security in Africa, which targets criminal activities, is widespread. But there are also a number of large transnational PMSCs who, along with their subsidiaries, guard mining sites, train national militaries and police, and provide security for development or humanitarian agencies. Even international development or UN peacekeeping/peacebuilding operations sometimes contract with PMSCs for various logistical support services.

It is fitting, in an ironic sense, that modern PMSCs should be operating in Africa. After all, Africa gave rise to much of the modern PMSC industry. The pioneer in the field was the South African-basedExecutive Outcomes (EO), which shut down in 1998 after having fought Jonas Savimbi’s rebel UNITA group in Angola and the murderous Revolutionary United Front in Sierra Leone. Even earlier, mercenary “companies,” such as 5 Commando, fought in the Belgian Congo and elsewhere during the 1960s. Companies such as the Dutch VOC or the British South Africa Company were the tip of the spear for colonial occupation and exploitation,.

PMSCs are the U.S. military’s American Express card: it dare not deploy overseas without them. This is nowhere truer than in Africa.