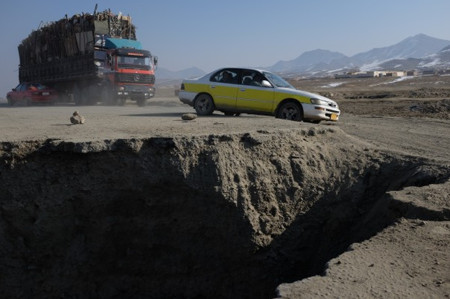 Taliban Gain Ground in Afghanistan as Soldiers Surrender Their Posts

Thirteen years ago, the United States called the reconstruction of the Kabul-Kandahar highway “the most visible sign” of efforts to rebuild Afghanistan. But today, that stretch of road is no longer a sign of progress.

Instead, it is now littered with craters from bombs and insurgent checkpoints and is “beyond repair,” an Afghan official said, and it is a symbol of the failed U.S. intervention here.

A report released Saturday by a U.S. government oversight body paints a grim picture of the state of Afghanistan’s roads, including the roughly 10,000 miles that were constructed, paved, repaired or funded by the United States. The new roads were hailed as key to bringing economic growth and security, even when they eventually became too dangerous for travel.

Now, the Office of the Special Inspector General for Afghanistan Reconstruction (SIGAR) says 95 percent of the sections of road they inspected were either damaged or destroyed. And 85 percent were either poorly maintained or not at all.

The U.S. government has spent nearly $3 billion on road projects in Afghanistan, which had only 50 miles of paved road in 2001. But according to an estimate from the U.S. Agency for International Development, it will cost more than $8 billion to replace the country’s road infrastructure.