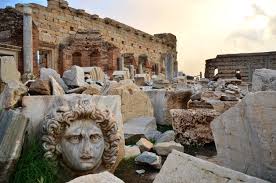 Quirico’s exposé uncovered an elaborate ring that is apparently operating in plain view. The illicit art is brought into Italy on Chinese-flagged cargo ships coming from Sirte to the Calabria port of Gioia Tauro, easily the most dangerous port in the country characterized by a mass of illegally constructed buildings mostly made out of abandoned ship containers. It is here that the ‘Ndrangheta has, for years, run the biggest drug-smuggling business in Europe.

On Monday, Interior Minister Angelino Alfano confirmed La Stampa’s reporting, adding that the Italian government is acutely aware the illegal ring of art-for-arms funds jihadi terrorism in nearby Libya. “We have studied the ‘GDP of terror’ and we know that one of the components is the commercialization of stolen art,” he told reporters. “The stolen artifacts feed ISIS and contribute to the GDP of terror.”

The Italian criminal gangs reportedly acquire the artifacts from jihadi tomb raiders in Libya in exchange for a wide range of weaponry, including Kalashnikov rifles and rocket-propelled grenades that the Camorra have in great supply from a long-standing arms-trafficking racket with Russia, Moldova, and the Ukraine.

The weapons are either smuggled back to Libya on the same container ships or left in Europe to be picked up by foreign fighters here. In September, Italy’s financial police discovered what they called “a veritable arsenal of the Camorra” in a stolen car in an abandoned parking lot in a slummy suburb of Naples. In the trunk, divided among duffel bags, were eight pistols, four sub-machine guns, an assault rifle, and 650 rounds of ammunition along with silencers for the weapons. The serial numbers had been scratched off all the weapons, according to police sources. The car was left unlocked, the weapons apparently ready for pickup by someone who could have easily smuggled them into Northern Europe.