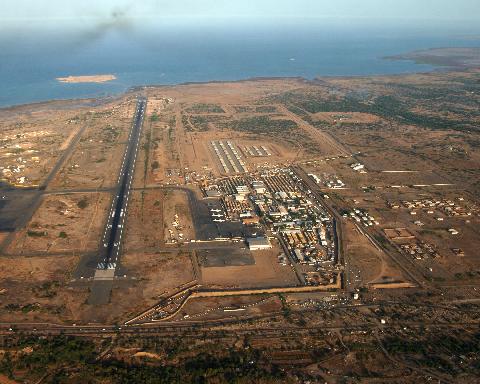 Djibouti, a resource-poor nation of 14,300 square miles and 875,000 people in the Horn of Africa, rarely makes international headlines. But between its relative stability and strategic location—20 miles across from war-consumed Yemen and in destroyer range of the pirate-infested western edge of the Indian Ocean—it is now one of the more important security beachheads in the developing world.

Its location also matters greatly to global commerce and energy, due to its vicinity to the Mandeb Strait and the Suez-Aden canal, which sees ten percent of the world’s oil exports and 20 percent of its commercial exports annually.Since November 2002, the country has been home to Camp Lemonnier, a U.S. Expeditionary base—the only American base on the African continent—along with other bases belonging to its French, Italian, Spanish, and Japanese allies. (The United States maintains numerous small outposts and airfields in Africa, but officially regards Lemonnier as its only full-scale military base on the continent.)

But now there are two new kids on the block: On January 21st, the Chinese Foreign Affairs Ministry announced an agreement with Djibouti to host its first-ever base beyond the South China Sea, and construction commenced days later.Though Beijing called the installation a “logistics and fast evacuation base,” the Asian power’s “near-abroad” rivals, such as Taiwan, opined that it is more likely the beginning of a new, aggressive military buildup to rival the United States. Six weeks later, Saudi Arabia declared that it too would construct a base in Djibouti, apparently as part of its newly assertive policy of countering Iranian proxies politically and militarily throughout the region.